Pelvic-Heart Integration® (PHI) was developed by Jack W. Painter, Ph.D. (1933-2010), whose life's work has been to create Bodymind Integration ways (i.e. procedures, protocols and systems). Initially he developed a body based process-orientated therapy, Postural Integration® (PI) in the 1960s and 1970s. He then developed Energetic Integration® (EI) a breath-orientated life energy therapy in the 1980s and 1990s. After a period of collaboration with Drs. Willem Poppeliers from the Netherlands with whom he gave the very first training courses in Sexual Grounding®; he formalised a distinct method, Pelvic-Heart Integration® (PHI) which is his final contribution in broadening the field of BodyMind Integration. This method is a synthesis of body, breath and energy therapy combined with bodymind drama (a form of embodied psychodrama), body reading and Eastern Philosophy. PHI was fully developed in the late 1990s and 2000s as a deepening program of its predecessors PI and EI, with a focus on establishing sexual grounding and integrating pelvic-heart connections. Together, these three approaches are extremely valuable and effective systems that help individuals and groups embrace and successfully develop their deepest Bodymind potential.

In the 1990s Willem Poppeliers who is a developmental psychologist, a certified PI Practitioner and Bio-Energetic Analyst attended several ICPIT meetings to stress the need for sexual grounding. He and Jack Painter organised a training and asked that ICPIT Trainers and their students colaborate with them. They initially led a training for ICPIT Trainers in 1993-1994, which was the beginning of their work together followed by a training for Teachers and Group Leaders in Somatics in 1995-96. A second training for ICPIT Trainers as part of the requirements to become a certified ICPIT Trainer finished in 1997 along with a supplemental Body Oriented Supervision Training. Their most significant collaboration was leading one year Sexual Grounding trainings (1997-98) held in Germany, Holland and Mexico (with Rosa Maria Sevilla, an ICPIT-Trainer). Jack and Willem’s book about the methodology was never published and they went their separate ways in 1999; Poppeliers solidifying his SG model and Jack pursuing a path to integrate more of his concepts into his Postural Integration® and Energetic Integration® which eventually evolved into the new PHI model.

From 2000 onwards Jack Painter fine-tuned, enhanced and fully developed the PHI model and taught PHI methodology while hosting many trainings thoughout Europe and the U.S. The culmination of his efforts and endless collaborations with ICPIT-Trainers has resulted into a powerful state-of-the-art method being taught by certified ICPIT Trainers though out Europe. Introductory workshops, one year personal growth trainings and comprehensive three year programs are now available world wide.

In bringing his work to the world, Jack Painter taught Pelvic-heart Integration® within different contexts. ICPIT Certified trainings where held in Belgium with Dirk Marivoet, in Austria with Elisabeth Renner and Margot Wieser (1951-2014) and in Italy with Carmine Piroli and Gilberto Bianchi. In the USA he gave workshops and collaborated with Deborah Taj Anapol, Ph.D. (1951-2015) author and certified PHI Practitioner.

Pelvic-Heart Integration® (PHI) focuses on various dimensions of sexuality and love. It aims at connecting and uniting the masculine and feminine aspects of the person. Masculine and feminine are non stereotypical nor are there strict rules that apply to gender. It is a bit like referring to the Earth as associated with the feminine (Mother Earth), and the Sun with the masculine (Father Sun). For others it is sometimes the other way around, for example the Sun Goddess and Father Moon....
The importance is that we bring consciousness and transformation to the internalised outdated inner models of the masculine and the feminine. Difficulties to develop intimate relationships, energy blockages, bodymind splits, and thought distortions of all kinds, may be signs of a lack of pelvic-heart integration. "If we consider the masculine energy as flowing from the heart downward into the genitals, this heart energy becomes a part of exploring or penetrating male energy – then the genitals are not isolated in what is often temporary satisfaction. If we consider feminine energy as flowing from the genitals upward into the heart, this genital energy becomes part of a warm receptivity – the heart is no longer lonely and searching. Here we are looking at an internal kind of integration which can be supported by special positive re-parenting. (quote Jack Painter, unpublished, 2007). Whatever our sexual orientation, PHI helps to develop the capacity for deeper passion and aliveness along with inner harmony and love in our relationship with ourselves, our partner, and life.

PHI is a powerful method that works with breath, movement and touch in order to overcome these issues in all stages of life, and to develop the capacity for deeper passion and aliveness, inner harmony and love in our relationship with ourselves, our partner, and life, whatever our sexual orientation.

PHI uses processes and maps which are culturally familiar and expected in the modern Western world. PHI is completely appropriate to address the central questions of how to be sexually alive and how to connect heart and genitals in a mature way.

Pelvic-Heart Integration® engages us directly (not just intellectually) in harmoniously uniting masculine and feminine energy currents.
It allows us to discover peace, wholeness, core light, orgasmic bliss and love within us rather than endlessly seeking satisfaction outside ourselves.
PHI facilitates the free flow of life force energy in the physical body, energy body, and emotional body and back thru the generations.
PHI enhance breathing, integrating the forces of Love, Eros and Sexuality.

Pelvic-Heart Integration® is a synthesis of different tools and systems, that is simultaneously working on many different levels in a comprehensive way as we integrate the different parts of ourselves. Through the process we transcend the dualities of male and female, yin and yang, love and sex, upper and lower chakras, individual and tribe, using a powerful combination of Bodymind drama (embodied psychodrama), Reichian breath- and bodywork, Eriksonian hypnosis, Energy work, pelvic release, body reading, work with the inner diaphragms of body balance, ritual & holistic coaching.

Pelvic-Heart Integration® is a holistic, comprehensive technology for transformation which emphasises the power of sexual energy and the ways in which our culture frequently distorts the natural flow of orgasmic energy. As a result, it provides a valuable framework for sexual healing – both in the sense of unraveling sexual dysfunction and in the sense of restoring trust and harmony between men and women.

Although Pelvic-Heart Integration® is a method developed for Western Individuals, it includes a lot of knowledge from Eastern traditions. The main purpose however is to heal sexual splits and harmonise the masculine and feminine energies in humans. As a consequence of the depth at which the method operates in the individual psyche, it also goes deeply into the spiritual dimensions of life.

One can specialise and become a PHI Practitioner by following our ICPIT training courses leading to ICPIT-Pelvic-Heart Integration® practitioner certification. See ICPIT-PHI-practitioner CERTIFICATION. You are then part of a wordwide community of peers who went through our formal and rigorous training programs, lead by certified ICPIT-trainers. Other ICPIT-certificates are those of "Master Practitioner," "Helper-Trainer," "Assistent-Trainer" and "Certified Trainer." For more information about these programs, please contact the ICPIT-secretariat.

The intention of the Pelvic-Heart Integration® (PHI) Practitioner Training is to support you in integrating the PHI methodology as developed by Jack W. Painter within your Bodymind Integration, Psychotherapeutic or other personal growth work (Western Tantra, etc.).
After Jack developed his world famous integrated system for general bodywork, called Postural Integration®, he realized that there is so much sexual energy locked in the body, the pelvis, the heart, the mind ... that it deserves more focus to liberate and integrate this potent life force.
We help acquire the theory and practice in Pelvic-Heart Integration®, to those interested individuals who want to significantly advance their level of integration in the psychosexual fields.

Unlike most transformational modalities which involve either bodywork or mental/emotional work, PHI approaches body, mind, and spirit in an integrated way. It clearly addresses the physical, sexual, and energetic obstacles to health and harmony along with the psychological and the spiritual aspects. While this approach demands a lot of the practitioner, it also delivers a lot to the client!

Pelvic-Heart Integration® can take the form of a Group modality, or a series of Individual sessions. Group work may not appropriate for everyone but it often has many advantages over individual work. Therefore, both individual and group facilitation skills are taught as part as the PHI training program. Individual session work and group work involves synergising the modalities of breath work, movement, Gestalt, Bodymind drama (embodied psychodrama), energy work, general bodywork (based on anatomy, physiology, modern trauma work, ...).

Introductory workshops are given by certified practitioners and trainers. Currently introductory workshops are given in many countries worldwide. Contact us for more information.
A one year personal growth program in PHI over three times five days is given by PHI-Trainers (members of ICPIT) which counts for the first year of the three year program towards certification as a PHI-practitioner. 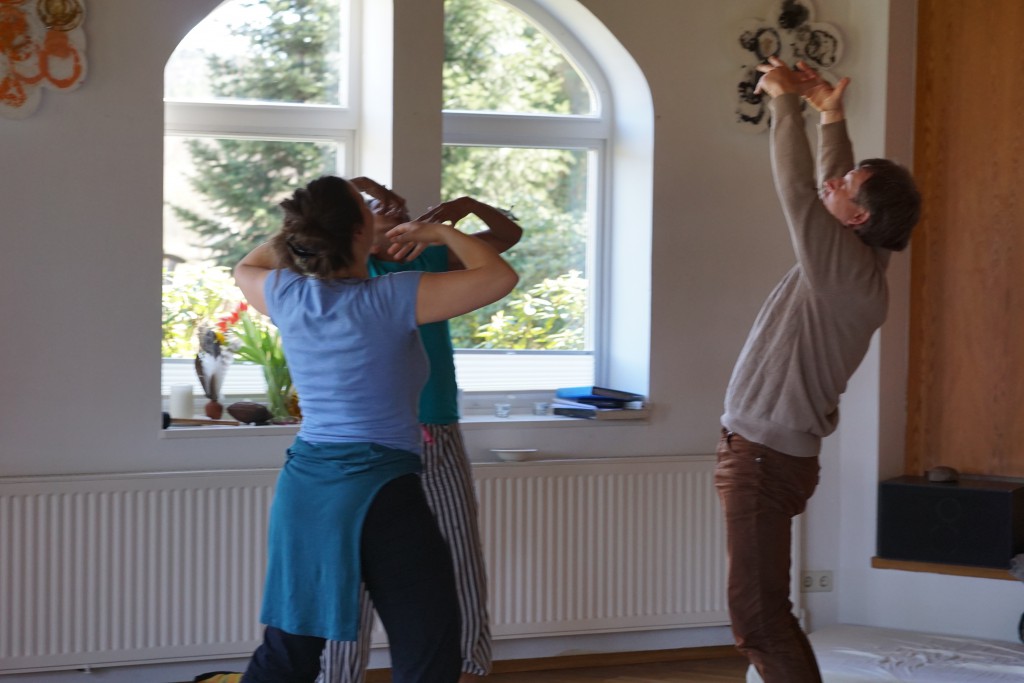 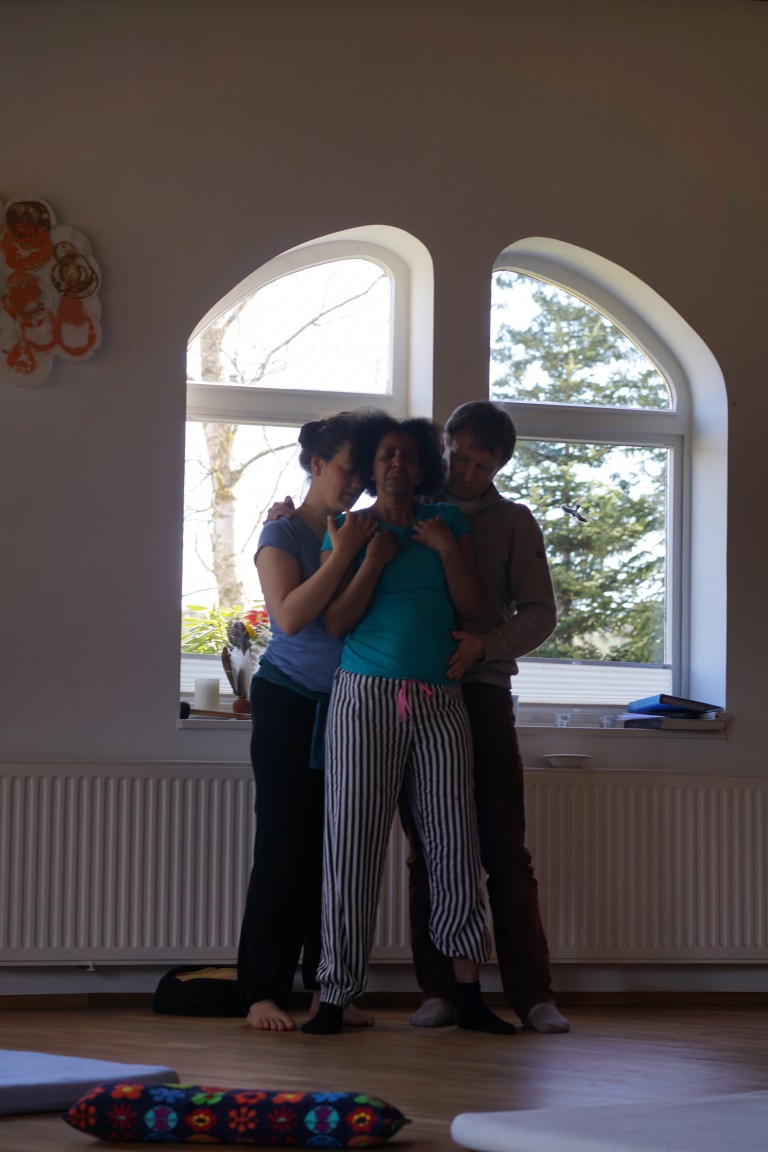